Most faucets feature some sort of set screw, carefully holding the entire setup together in one nice, neat package. When it comes time to disassemble the faucet, whether to replace a part or troubleshoot an issue, you’ll probably need to remove this set screw.

However, let’s say you started your project and gathered all the necessary parts, only to find a stripped set screw. So, now what? A regular Allen wrench won’t do the job because the little hexagon shape of the screw is no longer – it’s become a circle. If you’ve hit a wall in your project because of a stuck set screw, you’re in the right place, so keep reading to learn more!

How Do You Remove A Stuck Screw From A Faucet?

Every now and again, you’ll probably need to replace parts or clean elements in your faucet for optimal function. Sometimes, you’ll have to remove the set screw to access the inner portions of the faucet. Now, when you run into a stripped set screw, your first instinct might be to point fingers at the individual who managed to achieve the finished result.

However, since finding the culprit doesn’t exactly fix the problem, let’s take a look at a few potential fixes. Here are the things you might need for this process:

Use A Rubber Band

Before we get too crazy with the following methods requiring power tools, let’s keep it simple with the rubber band method. This won’t always work, but when it does, it saves you the trouble of drilling into the screw itself.

Start by placing a rubber band over the stripped screw. Position a flathead screwdriver in place over the rubber band, then attempt to turn the screw counterclockwise. In some cases, the rubber band will lend just enough grip to get the Allen screw to loosen.

Use A Pair Of Pliers

Another solid alternative is using a pair of pliers when the rubber band method doesn’t work. Before using this method, ensure the entire head of the screw is exposed. If it isn’t, you run the risk of breaking the screw, which will make it almost impossible to remove.

Using a pair of locking pliers, grip the head of the screw firmly. You’ll probably notice slight dents in the screw where the pliers grip it, but that’s ok, as you’ll have to replace the screw anyways. Turn the screw counterclockwise slowly to loosen it.

Don’t crank on the pliers or try to forcefully remove the screw, as you might break it. Instead, apply slow, steady pressure to the screw in an attempt to loosen it. If this method doesn’t work, jump to the next option.

Use A Flathead Screwdriver

Once the groove is deep enough, fit the flathead screwdriver in the screw. Apply slow, steady pressure to the screw, turning counterclockwise to loosen the screw. If the head is too thin, this method might not work.

Additionally, keep in mind that this method may damage the faucet if the screwdriver accidentally slips.

Bring Out The Power Tools 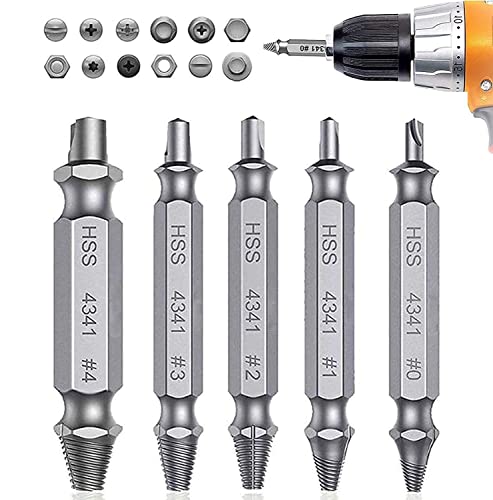 Power tools are the next best thing if the above methods fail to remove the screw. So, gather the tools we mentioned above and continue reading for a guide on removing the screw.

First things first – you need to pick the right screw extractor. If the extractor is too big or small, it won’t attach to the head of the screw like it needs to. So, make sure you select the correct size that will work for the set screw in question.

Next, set up your drill. Once you have the right extractor, you need to find a good-sized drill bit to use. Pick a drill bit that will work with the size of the set screw and screw extractor. You need to drill a tiny hole in the end of the screw to make room for the extractor.

Attach the drill bit to the power drill, then place the tip of the bit against the center of the set screw. Make sure it’s in the center, not too far in one direction, as it won’t work well if it’s not centered. Drill a pit roughly 6.5 millimeters deep (give or take) into the tip of the screw.

Use the wrench or pliers to rotate the screw extractor counterclockwise. The stripped screw should give, loosening as you turn the extractor. Once it loosens enough, remove the screw altogether.

Of course, you’ll need to replace the stripped screw before reinstalling the faucet’s components, providing you’re not getting rid of the faucet altogether. You might be able to use a generic screw, or you can find an exact replacement part from the manufacturer’s website.

Toss the old, stripped (likely destroyed) screw and replace it with a new, matching one.