Kitchen and bathroom faucets come in all sorts of varieties – different styles, designs, and configurations. There are plenty of options, whether you prefer modern looks or traditional styles. Or, you can find options suited to compact spaces while others fit best in larger areas.

If you’re looking for a new bathroom faucet, you’ve probably come across dozens of centerset faucets. So, what is it? What’s the difference between a four-inch and eight-inch centerset faucet? We’re here to answer these questions, so stick around to learn more!

There are quite a few types of faucets out there, some designed for kitchen use, others specific to bathrooms, and a few intended for utility sinks. Bathroom faucets (see also ‘Best Bathroom Faucet For Hard Water‘) are usually one of five types:

Centerset and widespread faucets are the two most common types, but you can find other options out there as well. Kitchen faucets come in quite a few different styles, but they’re classified differently than bathroom faucets. A few common types of kitchen faucets include:

What Is A 4 Inch Centerset Faucet? 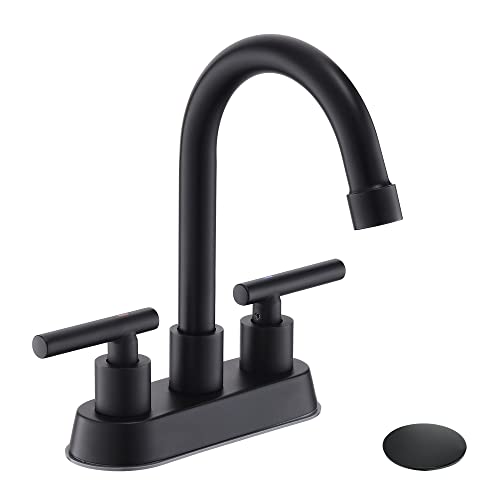 Centerset faucets are some of the most common picks for bathroom faucets. These faucets fit into three-hole pre-drilled sinks with a four-inch spread. The outer holes allow for each tap’s connection, while the hole in the middle offers space for a mixing connection.

The singular piece makes installation incredibly straightforward. Since everything comes on one plate, you don’t need to worry about aligning each part perfectly with the other. Additionally, you shouldn’t have issues with the handles ending up in wonky positions while off.

Many times, installation is as simple as inserting the faucet into the three holes in the sink deck, then securing the faucet to the sink with nuts. Then, connect the water lines, and hook them up to the water supply lines. Hook up the drain assembly, connect it to the P-trap, then check your handiwork. It’s often as easy as that!

While these faucets are convenient, you probably won’t be able to find fancy or elaborate designs. There’s not much variation from one tap to the next since the four-inch configuration restricts the variability. Although the handle design might be different, and the spout might be a high or low arc, they all generally look the same.

Some of these faucets have a single handle featuring a mixer for cold and hot water, while others have two handles.

How Do You Measure A Centerset Faucet?

If you’re replacing an old bathroom faucet and aren’t replacing the bathroom sink, you’ll need to know what size of faucet you have. This way, you can replace the existing faucet without going through the hassle of drilling new holes or buying a new sink.

Many homes feature centerset bathroom faucets, as they’re often less expensive than other, fancier faucets on the market. Luckily, centerset faucets are easy – easy to measure, easy to install, and pretty simple to remove.

To kick things off, you’ll need to measure the faucet. You can measure above the tap or below the faucet; it’s up to you. Faucets usually come in standard sizes, like 4-inch centerset, so there shouldn’t be any guesswork.

Just like that, tada – you have your measurement. Now you know what to look for in a new faucet! You can find new faucets at most home improvement stores, including Lowe’s, Home Depot, and Ace Hardware. 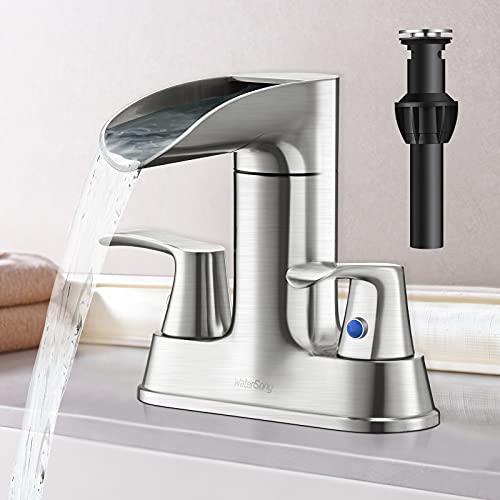 What Is The Difference Between Single-Hole And Centerset Faucets?

Centerset and single-hole faucets are both popular picks for compact bathrooms. If you’re working with extremely limited space, a single-hole faucet is often the better choice since these faucets tend to have an even smaller footprint.

The main difference between these two faucets is the number of holes necessary for installation. While a single-hole faucet requires precisely that, centerset faucets need three holes for installation.

Can I Replace A Centerset Faucet With A Single-Hole Faucet?

What Is The Difference Between A Four-Inch And An Eight-Inch Centerset Faucet?