Like dishwashers and microwaves, garbage disposals are common in millions of kitchens. Garbage disposals offer a degree of convenience, effortlessly whisking away leftover food scraps. They offer an array of benefits, but in order to reap the benefits, the correct maintenance is necessary.

So, aside from cleaning, do garbage disposals need to be emptied? We’re here to tackle this question, so stick around to learn more!

Do Garbage Disposals Get Full?

No, garbage disposals don’t fill up. Since they don’t fill up, they don’t need to be emptied. This is part of the convenience of these handy little appliances. The system grinds food waste and then sends it on its way.

How Often Should You Empty Your Garbage Disposal?

How Do You Empty A Garbage Disposal?

While you shouldn’t need to empty your garbage disposal, clogs may occur every now and again. When food waste builds up, either because it’s a food item that shouldn’t go in the drain or the disposal isn’t working correctly, it can clog the disposal.

In some cases, the disposal’s impellers will freeze due to food caught around them, halting progress altogether. When this happens, you need to free the clog before you can continue using the disposal.

Since the kitchen sink drains into and through the garbage disposal, a clog may cause your sink to back up with water. On top of that, food waste sitting in your garbage disposal will release unpleasant odors as it breaks down, so it’s best to tackle the problem immediately.

To free the blades, you can use an Allen key to rotate them manually. There should be a small slot in the underside of the disposal that fits an Allen key. Use the key to turn the blades manually, rotating back and forth until the blade spins freely.

If an unpleasant odor persists, there are a few ways to clean it. Many homemade cleaning solutions call for normal, everyday things many people have on hand. For example, some mixtures may call for baking soda, salt, vinegar, or similar items. Or, some may call for citrus peels or essential oils to help freshen the disposal.

How Do Garbage Disposals Work?

On the other hand, continuous feed disposals don’t need to be covered. Instead, you can continuously scrape food scraps into the drain while it runs. This makes it convenient to get rid of large scraps of food, allowing you to add food waste until it’s gone. 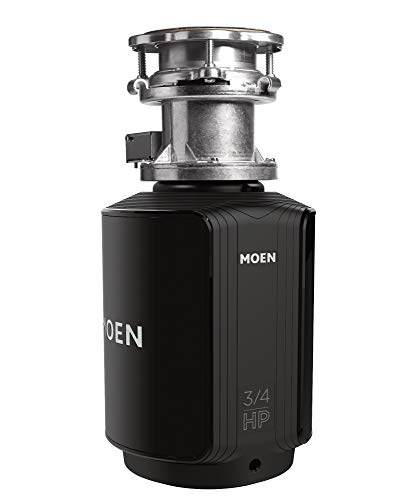 Regardless of the type of disposal you have, the general operation is the same. The food waste you scrape into the drain ends up in the canister of the unit. The grinding chamber inside the unit has shredding blades that break down the food scraps.

Once the food waste is reduced to mere particles, an impeller arm and plate force the particles and water down the drain. So, the food waste doesn’t linger in the disposal itself. Once ground into small bits, the system whisks it out and into the drain.

From there, it follows the same track as other wastewater in your home. Garbage disposals are more common in homes hooked up to a city septic system, as they can mess with the biology in septic tanks.

Tips For Operating A Garbage Disposal

When you initially buy and install a garbage disposal (or move into a home with one), it’s essential to understand the ins and outs of the system. If you’re new to the specifics of these appliances, here are a few tips to start building the general foundation of your knowledge.

Only Put Disposal-Safe Food Waste Down The Drain

While these systems are handy additions, you need to be careful what you send down the drain. Although garbage disposals are designed to handle food waste, they can’t handle all types of food waste.

Here are a few foods that should never go down the garbage disposal:

When grinding food waste in your garbage disposal, you should always run cold water. The added moisture helps lubricate the mechanisms and allows food waste to grind and pass through easier.

You need to be careful putting hot water down the drain, as it may damage the pipes. Boiling water can melt PVC piping and wreak havoc on the garbage disposal, so avoid using it. While you may reach for it to escort liquid oil or fat down the drain, both can cause issues in the plumbing. So, it’s best to avoid putting either down the drain.